skip to main | skip to sidebar

Live Streaming From TRANSACT15 - Join In!

It had to be done ... I had to pick a single platform for live streaming from TRANSACT15. No more playing around with simultaneous live feeds using Meerkat and Periscope since that would just cause confusion for folks that were interested in tuning in. I did a fair amount of testing over the past 2 weeks but no clear cut winner dominated the tests.

Weighing heavily on my mind was the concern that bringing something new like live streaming to TRANSACT15 is a big responsibility. I've always gotten pleasure out of introducing technology to others, so where the "big responsibility" concern comes in play is that you have to pick WINNERS or risk doing a disservice to others that you may drive to adoption. That said, I've picked my winner and the winner is Periscope.

Admittedly, it was an easy decision since the epic battle between two tech players - that I blathered on about in a live broadcast last Friday - was decisively won by Periscope ... and in less time than it took in the 1980s for the British to win the battle against Argentina over the Falkland Islands!

Just LAST Thursday Meerkat announced $14 million in new funding and later in the day Twitter launched its rival streaming app called Periscope.  By Sunday night, the Periscope-Meerkat battle was brutally lopsided. The Periscope app had become a smash hit, breaking into the US iPhone top-30 chart by Friday night (a rare feat for a social media app).  Conversely, Meerkat was quickly dominated like a braggadocios Rhonda Roussey opponent and appears to be close to "tapping" in Round 1. By Sunday night Meerkat had collapsed to No. 523 on the US iPhone download chart.

Is this "quick win" a sign of the times in today's real-time tech world?  Will the tech world ever again see a "long haul" battle for supremacy like the Apple versus Microsoft conflict?  I know this writer will surely hesitate using the cliche "epic battle" any time soon! 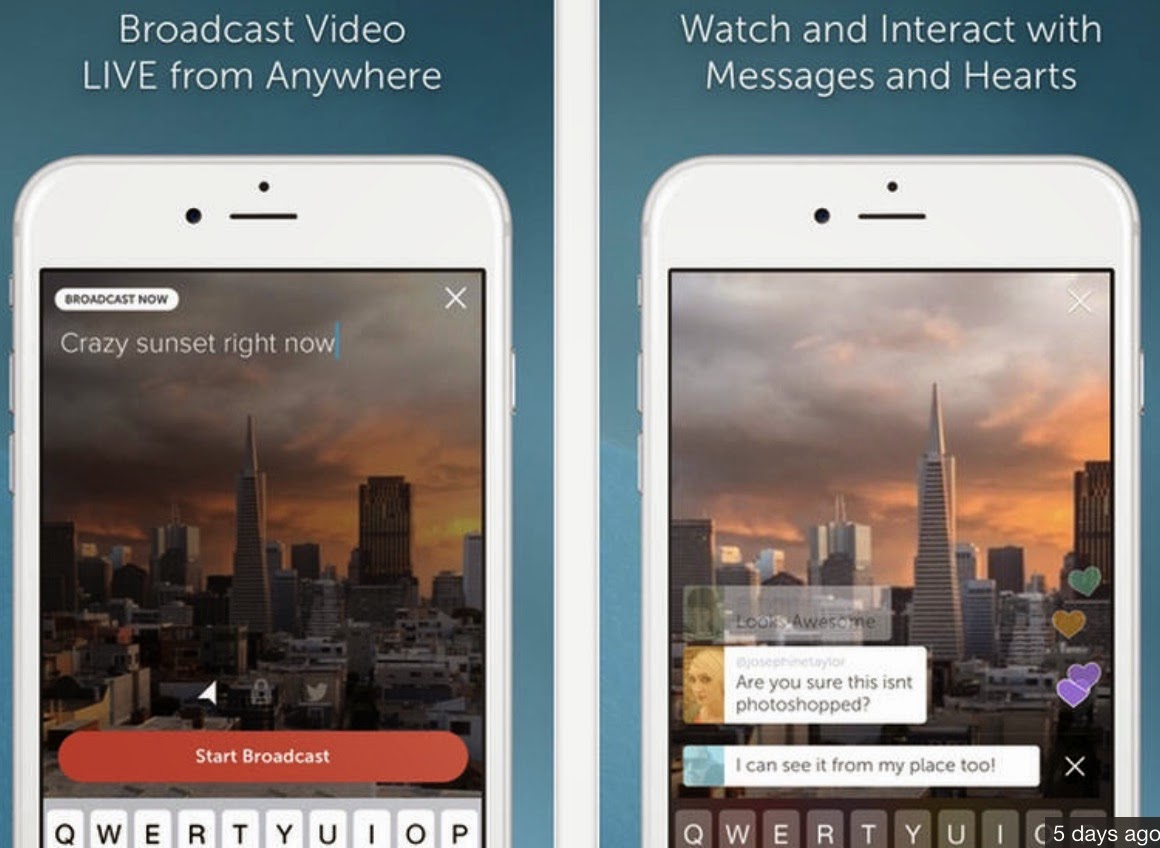 It will be amazingly simple for you to see how this Periscope "live streaming" stuff works at TRANSACT15.  Real-time simple if you have an iPhone (sorry Android users but Twitter is still working on an Android version of Periscope). Just download Periscope and it will intelligently connect with your Twitter account allowing you to immediately start watching feeds, or live stream yourself. Android Users: I will post a few recorded broadcasts as videos and share them on twitter ... especially the good ones.

Throughout the show I will be live streaming from the Twitter handle @emscorporate. If you follow us on Twitter you will see tweets throughout the show beginning with "LIVE ON #PERISCOPE" announcing that a new live feed has just started - just click the link in the tweet and you will be watching the live feed. Once a live feed ends, Periscope will keep it visible for 24 hours ... hearts, comments, and all. The broadcaster also has the ability to download the broadcast to their camera roll.

I will be kicking off the first Periscope live feed tonight at 6:30 pm pst from booth #1617 during TRANSACT15's opening reception.  Please stop by if you have something to say since my goal is to add value to the show conversation. Got a good elevator pitch then bring it by booth #1617 ... or any other topic you think would be of interest to attendees or industry folks watching/listeng from afar.

BONUS READING: For those looking for a "how to" article, I found a nice Pericope tutorial by @AnaHoffman ... Periscope Tutorial: How [and Why] Use Twitter’s Periscope

Posted by Merrell at 7:46 AM No comments:

Pre-#TRANSACT15 Twitter tweets (622) have increased 514% over the same prior period measured for #TRANSACT14 (121).  What a pleasant surprise for the pioneering payment marketeers that have been trying to foster the social conversation for several years now at payment industry events.  Heck, there have been some recent regional shows that it felt kind of creepy when you appeared to be the only one trying to develop a social media conversation.

Big kudos to @electranassoc for fostering an environment that encouraged a social media conversation with their brilliant "Team Selfie" contest that pretty much said, "we embrace social media as part of TRANSACT15."  While many trade show organizers feared the demise of their events if the conversation moved online, the Electronic Transactions Association spotted the trends and saw how it could be a benefit.  Fear of VIRTUAL-ONLY trade shows?  Never attended one and probably never will despite my penchant of being an early adopter of all things technology related.

I did a little non-scientific drill down into the aforementioned 565 pre-#TRANSACT15 tweets and categorized them as follows:

Congratulations if you or your company has joined in the conversation!  Just using social media to say "Stop by and see us" shows that your business "gets it." But for those of you that added exceptional value to the conversation by posting a tweet that falls into the latter two (2) categories, I salute you.  Here are just a few that I found exceptional value in, added comments after each as well: 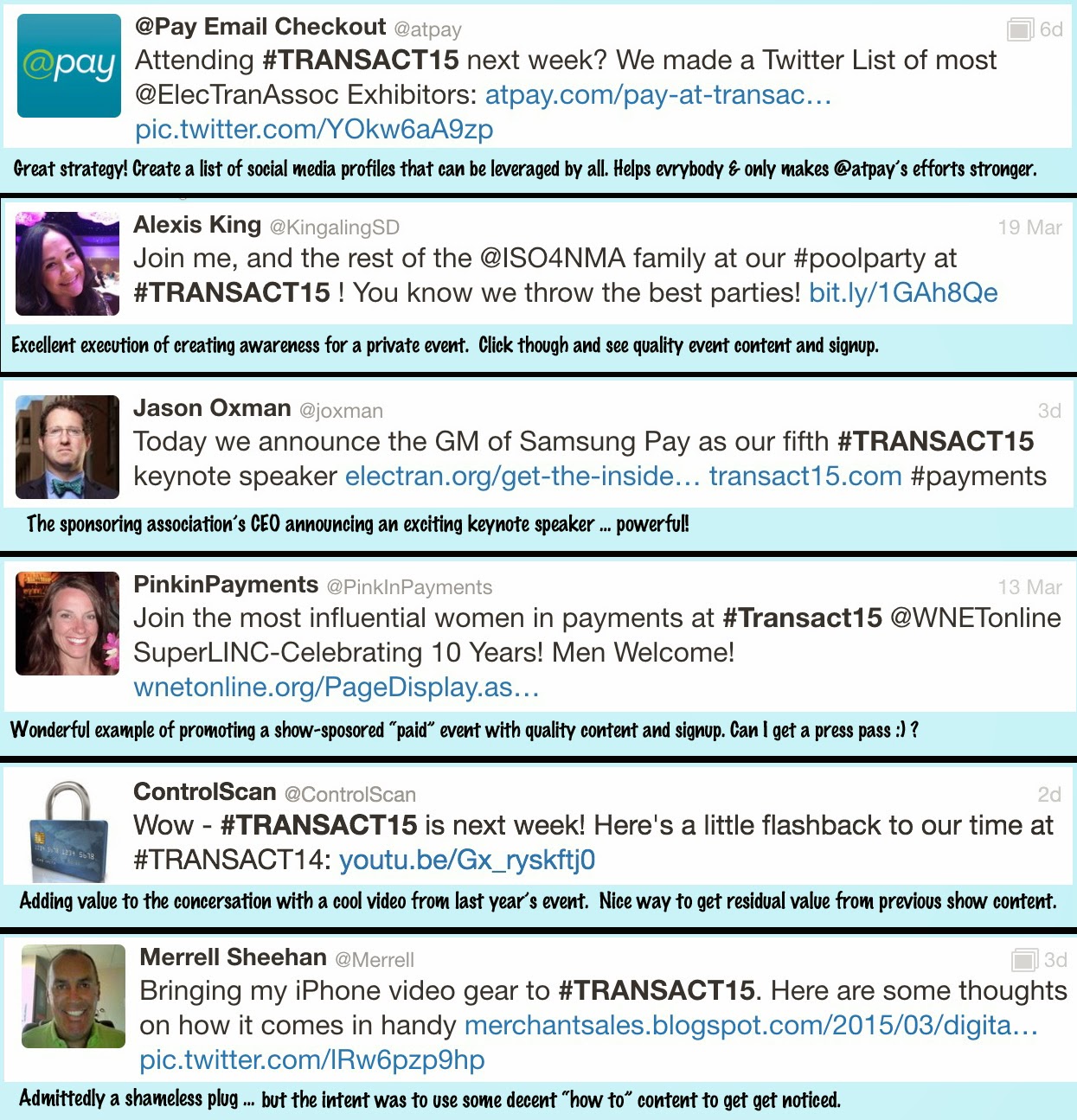 It is not just Twitter where you can find social media mentions of TRANSACT15.  I also found the following:

But this writer believes that Twitter is by far the premier social media platform for trade show conversations.  Twitter is an up-to-the-second newsfeed that lends itself well to an event's business conversation.  Though Facebook is a great tool for businesses doing paid social, I felt a little awkward joining the TRANSACT15 event groups and publishing this to my timeline. I do have high hopes for the new micro live-streaming platforms like Periscope and Meerkat primarily because they leverage the Twitter ecosystem and also provide real-time news.  Stop by booth #1617 if you want to try out live streaming during TRANSACT15.

So if you have not joined the conversation here are some simple ways you can get started:

There is an audience out there that wants to hear what you think.  If you have a question or a social strategy you want to talk about ... or want to promote something with a live stream on Meerkat and Periscope just stop by booth #1617 and look me up.  Let's keep the momentum going!

Posted by Merrell at 9:59 AM No comments:

Timely publishing of good content maximizes the effectiveness of your social media efforts in many "live event" situations.  Especially when the event is well attended both in person and virtually by a motivated tribe of individuals.  Trade shows are the perfect environment for this "speed to publication" strategy and if you have a little insider knowledge along with some cool new content creation technology, it is not that hard to stand out amidst the noise of the event. 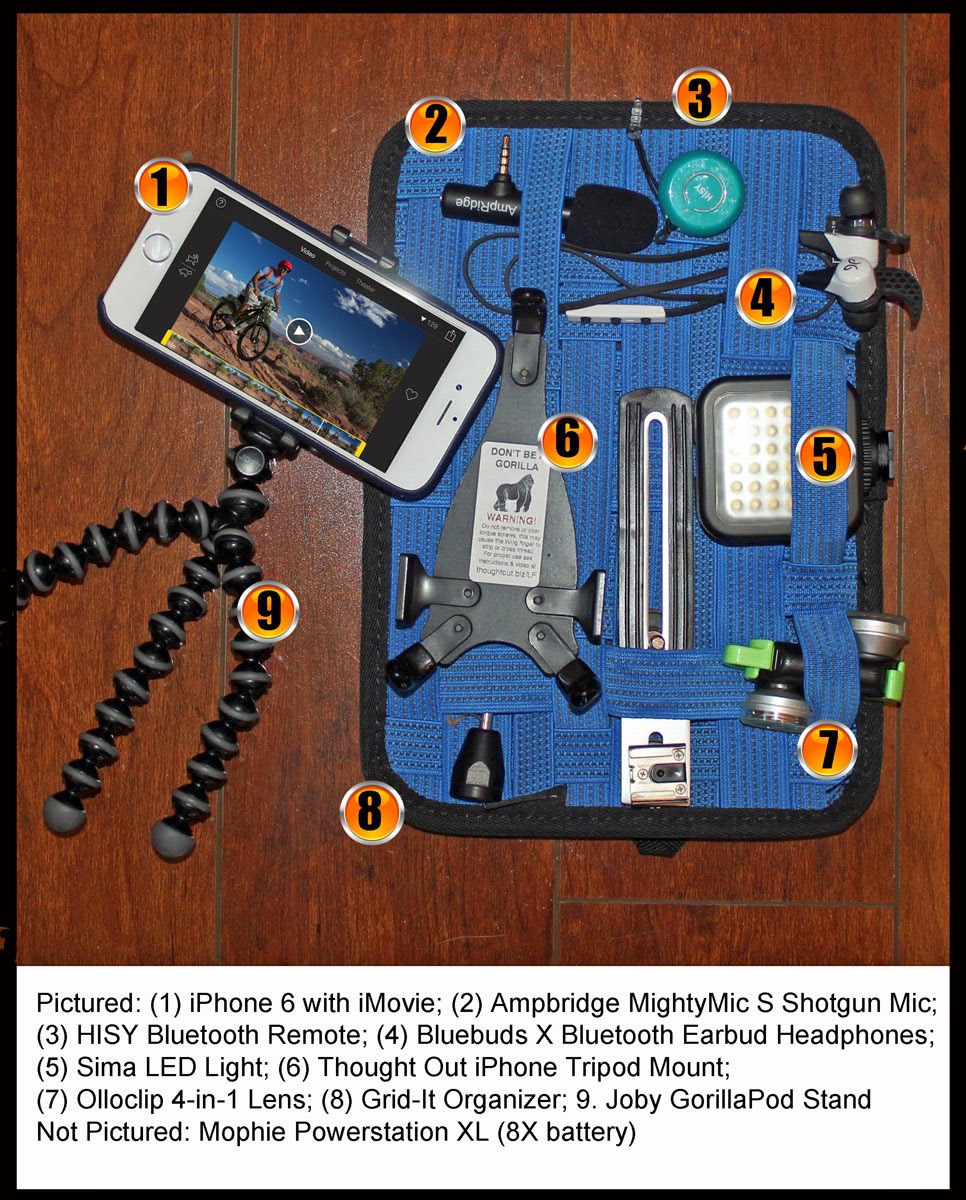 Let's face it, content that gets digested in today's crowded digital media space is short and to the point, and normally takes the form of digital imagery and videos.  Heck, when a trade show is going on, no matter how much you love the written word, your tribe's bandwith is limited during the event and they just don't have the time to read your six hundred word blog post.  But, they will watch your 90 second video (assuming it’s not a straightup sales pitch), or check out your quality images of the event happenings and probably "follow" your social footprint in hopes of seeing more ... and that is a WIN!

Configure your content so that it can be consumed at engagement outposts like Facebook, Twitter, Instagram or wherever, and then the strategy is to invite them back to your home base to take whatever that next-action is that you define as success.  Important Note: This strategy will FAIL if you consistently violate the cardinal rule of social media content: Thou shalt not publish content that will not have a perceived value to your intended audience.

In this writer's opinion, Twitter is still the best social platform for leveraging this opportunity, but I have high hopes for a new social platform, Meerkat, that allows for live broadcasting and with its tight integration to the Twitter universe it is easy to promote. That said, don't let me discourage you from experimenting with other social platforms since experimentation should be an important component of any social strategy.

The key to Twitter success is using the show hashtag.  Believe it or not, there really are interested individuals following and using the show hashtag that are looking for your content.  If you don't believe me just log into Twitter and search the hash tag #TRANSACT15 ... you will be pleasantly surprised at all the pre-show activity on this channel. The show hashtag allows you to personally deliver your content to interested individuals, and if they find value in your content they will share it downstream with members of their tribe.

OK, so let's back to the speedy creation and publication of content that will be digested by your tribe.  During trade shows you've got to make your posts easier to consume on the go. You have a limited window of opportunity with a captive audience that is interested in anything pertaining to the event. Short is good, and what better way to get your message across with limited words than by adding pictures and video to make your content stand out?

You are communicating with a business audience so  you have to "up your game" a notch to get noticed, but in no way am I saying that you need to create a corporate-quality production. Social imagery that is directed to a business audience needs to be targeted and to the point, in focus, and clearly audible.  "Targeted and to the point" is dependent on your insights and creativity, but in focus and audible is easily improved with some tools to enhance your recording device.

My suggestion is to travel light so you are "ever ready" to catch that content moment.  I accomplish this by taking advantage of my iPhone 6's built in camera and accessorizing it with some photo and video tools to improve the quality of my imagery and videos.  I have attached a picture of my digital content session kit and would love to find out what you are doing.

If you are attending TRANSACT15 feel free to stop by booth #1617 and I'll show you my gear.  Even better, if you have some value to add to the “conversation” stop by and let's create some good content.  Hope to meet you next week!
Posted by Merrell at 8:02 AM No comments:

I am Still Charmed by my Meerkat

Wrote an published a guest post today for Plusbyems.com about my recent experiences with the new Meerkat live broadcasting application.  Here is how it starts out ...

My Meerkat stood me up yesterday, but I am still enamored with her.  No, not the type of meerkat that endeared the hearts of children in the Madagascar movies, but rather this geek's new bright shiny object that is the hot new mobile app called Meerkat.

Posted by Merrell at 1:29 PM No comments:

Merrell
My persistent sermon is "empower our sales force." I started out in the payments industry as a software evangelist at ICVERIFY back in the early 90s. Now I lead a schizophrenic existence: product manager, blogger, speaker, trainer, digital marketeer, social community organizer, cartoonist, scout leader, coach, and father ........